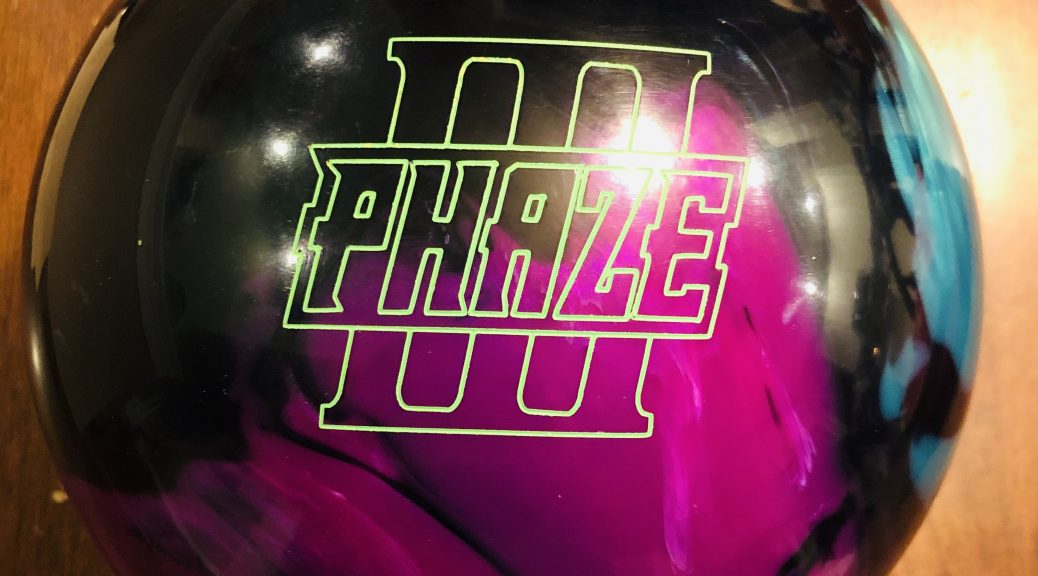 First Impressions
It’s a pretty ball. Smells good if you’re into that sort of thing. Nice motion that many are going to like.

Thanks to Jeff Smith and Pure It Bowling for drilling our equipment.
Buy the Storm Phaze III at PureItBowling.com.
Thanks to Limerick Bowl in Limerick, PA.

Value
B+
This well known core in a clean cover offers a missing reaction in the current Master Line. Not the cheapest ball out there but if it lives up to it’s Phaze II sibling, value could be sky high.

Overall
THS: B+
Sport: B
The scores are preliminary as is usually the case in the sense that it’s based on our first battery of tests. Sometimes when we’ve seen a core or cover before, we have some history to base our info on. In this case, the Velocity core gets the benefit of the doubt. The R3S hybrid was seen on the Intense Fire. While that cover felt smoother on the big asym RAD-E core, it definitely spools up fast downlane with the Velocity core. With the factory finish, it’s super clean, maybe a touch too clean out of box. I would say 70% of the time, I want to take that factory shine off straight away and this fits in that 70%, at least on a fresh condition. On our house shot, you’ve probably noticed that in can feel a little “sportish” in the sense that balls do not come off the outside strong once you are past 30ft. I’m not going to criticize the ball for that. What I can say is this ball is crazy angular and continuous when it goes. Half the time it was finishing at the 9 pin for me. In fact, literally the first ball I threw with it was an 8 pin leave. Despite being able to push it wide at times on fresh, there is something really special about the motion. It has a pretty heavy roll which I like out of this symmetric core. And I can tell you this is very different from the original Phaze. The first one was smoother earlier, and slower responding to friction. I think that ball may have been misunderstood as people have typically equated quicker response with Storm. I believe Storm offers many ball reaction types now but the Phaze III is in the formula of what we know best from Storm. Heavy roll but comes off the spot hard and just keeps driving through the pins. On a separate video, we’ll have a look at surface adjustment when I knock the shine off but I have to admit the roll is pretty good as is. The Phaze II clearly has more midlane control and a little less pop through the pins.

Sean was next. Shiny heavy rolling ball typically is a recipe for success here. The Phaze III didn’t disappoint. After a little bit of warm up, he quickly understood what this ball would do. Sean’s best look was around the 3rd arrow. That’s really more a characteristic of the shape of the house shot. He found that slot where he got that easy length and the ball seems to start up after the end of the pattern but boy is it explosive. It’s like the core is actually speeding up as turns. Might sound cliche but that really seems to match a core called “velocity”. This test became pretty straightforward. On this fresh shot, like I said there is a pretty defined area. He could get in to 4th arrow and as it breaks down he could probably create massive angle with this ball. You can see what I was referring to with misses out on this pattern. Because the ball wants to start up so late, it looks a little lazy coming back. But if you keep the breakpoint in just a bit, you’ll see the angle this ball is capable of generating.

Next is Bryan. His look was ultimately around the second arrow. He can’t go more direct as this ball is a bit stronger than his Idol Pearl. He just had to find the right angle as the ball is too angular to really go up the boards. It’s too quick downlane to work like that on this pattern. Overall he had a decent look considering the high shine and fresh pattern. I think this will make more sense when the pattern breaks down a bit as it inevitably does from the right side. He had a couple of shots deflect but notably they tended to carry.

Sport Shot
We had an opportunity to test the Phaze III on the 42ft 2019 PBA Scorpion pattern. This is a higher volume pattern and surely this shiny is not for fresh so we did use a pair with 3 games on it. I’ve been surprised by shiny stuff before and I did not dislike the ball on this pattern. The more direct line is a little tricky with the quick backend. Tried it with angle from the second and third arrows. They aren’t pretty going through the pins but they struck. It’s like the shape is so close to working but cover finish just isn’t the right matchup. You’ll see that the Phaze II reads the midlane much more definitively and still goes downlane.
Sean was next and he enjoyed the Phaze III on this sport pattern. He gets into around 18 at the arrows and breakpoint to about 10-11 on this 42 ft high volume pattern. The ball looks so good. When this ball hooks up, it really goes through the pins and that’s something noteworthy. The clean look can occasionally push a little long but this shape makes Sean comfortable so execution just gets better.
Finally Bryan. He was surprised to find he really enjoyed this ball on this pretty tight pattern. He had a nice little window going through around 14 at the arrows and had room at the breakpoint from 9 to about 12 or so. That amount of room on what was very tight really impressed him and me watching it. He could get it downlane and take advantage of that nice punch from the Velocity core.

Final Thoughts
What can I say to wrap it up. All three bowlers enjoyed the shape of the Phaze III on lane. That clean look but heavy rolling flip that makes it ultra continuous is a characteristic that not too many balls can tout. If your pattern is tighter without forgiveness to the outside, this is not first out of the bag as you will get some over/under. But if your house has friction to the outside which is most or you’ve opened up a tight pattern a bit, the Phaze III definitely is coming out of the bag. The type of roll it has will give it a wide range of usability in the sense that you can keep moving in as it loves to generate angle. So it can come into play as soon as your duller benchmark is starting to plac and can stay in play for a while. If you pick up a Phaze III, I don’t think you will be disappointed.