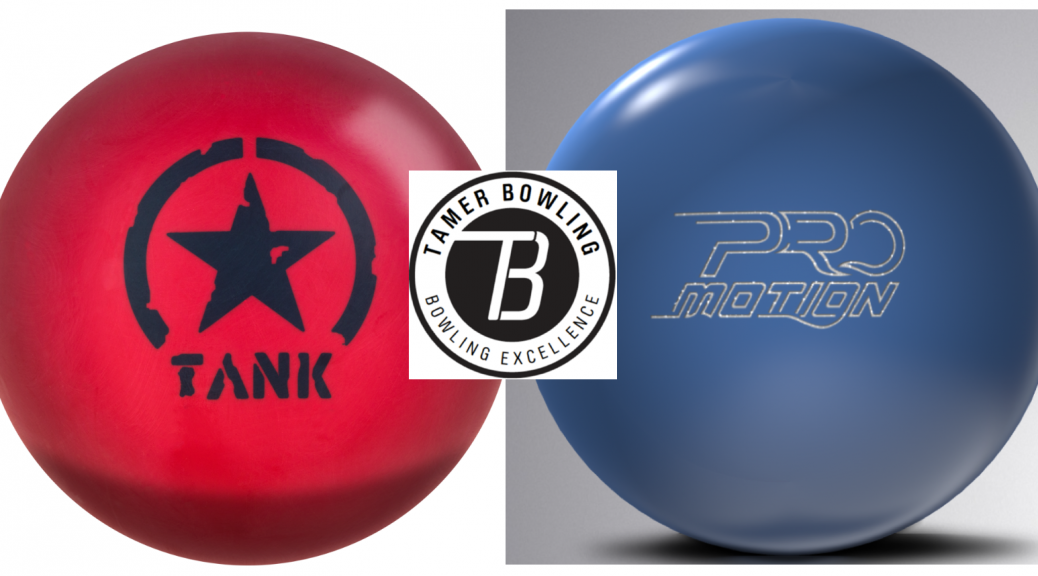 We’re doing something a little different here. We test lots of balls and constantly asked how x compares to y. The goal is not to say oh this ball is better than the other or vice versa. It’s more to call out the unique characteristics that might make one ball more conducive to a certain condition, style, etc.
Today we are looking at the Storm ProMotion and the Motiv Tank Blitz. Off the bat you might wonder why compare these two. But honestly, they have some similar characteristics that will make more sense as we get into it.

How do they compare on paper?
The Promotion uses the SPEC cover. The Tank Blitz uses the Frixion+ Microcell Polymer. Both are solid. Both come out of box at 2000 grit but the Tank Blitz does look rougher as the finishing process is a bit different. The core specs would make you think these are very different balls but we’ll get into that later. The Promotion uses the Piston core with medium RG and high diff. The Blitz uses the Gear core with low RG and low diff. But the core shapes are not very different to be honest.

The big driver to compare these two for me fundamentally comes down most to the covers and usability. Both covers claim to have limited oil absorption so clearly both brands are chasing something here. What I can say is that both covers are smooth. We’ve seen the SPEC in multiple balls including the Crux Prime and Gravity Evolve. For me, it was poignant how different the ball reactions are and how amenable the SPEC cover is to shaping on lane. Just to be clear, I saw them in this order of motion and strength: Pro-Motion, Crux Prime, and Gravity Evolve. I’m not sure everyone saw it that way. With the SPEC cover it means that the ball has that traction in the first 30ft. Not where it feels like it’s hooking at your feet but good midlane control. But with the Piston Core, this ball smoothly but very strongly goes downlane. I got a lot of motion downlane, maybe more than most. The Pro-Motion feels like a strong ball that can cover not only heavier oil but also get smooth but strong downlane motion.

When you start looking at the Tank Blitz, it’s not as far as you might imagine considering Motiv mentions a “more traditional urethane shape”. Out of box, this ball is almost as strong as the Pro-Motion. They are only a few boards different in practice. However, it is true that you will feel a little bit more of that urethane like feel, especially through the fronts. It digs in through the fronts. That is a clear difference in the “feel” of the balls through the fronts but honestly on video I think it’s a little hard to see. But you recognize it by seeing how the ball reacts downlane. Because of that extra early churn, the Tank Blitz will be a little harder to project down lane. But that also helps you feel more confident it’s going to go through the pins. If you do project it, or rather push it through the breakpoint you have no chance to hit the pocket. With the Pro-Motion, it doesn’t have that same “urethane” feel through the fronts so getting it down the lane doesn’t feel as hard. But at the same time, you want to give it some room or it won’t hold. You can’t completely miss outside as it is too smooth to make a sharp move back.

So when you think about these 2 balls, they could be relatives. Essentially, the Tank Blitz is like very souped up urethane. The Pro-Motion is a urethanized reactive. Could you have both? Sure. Both are considerations for when you want good control of the fronts and mids and smooth backend. Both can be considered for higher volumes. It’s probably going to be the situation of which reaction suits your eye. I know in my mind if I’m OK with covering boards with that reaction, it’s the Pro-Motion I’m pulling out. If I want to keep my angles a little more closed on the same condition, the Tank Blitz comes out of the bag.

There you have it. Hope you enjoyed the comparison. Look forward to more of these coming soon and thanks for watching.