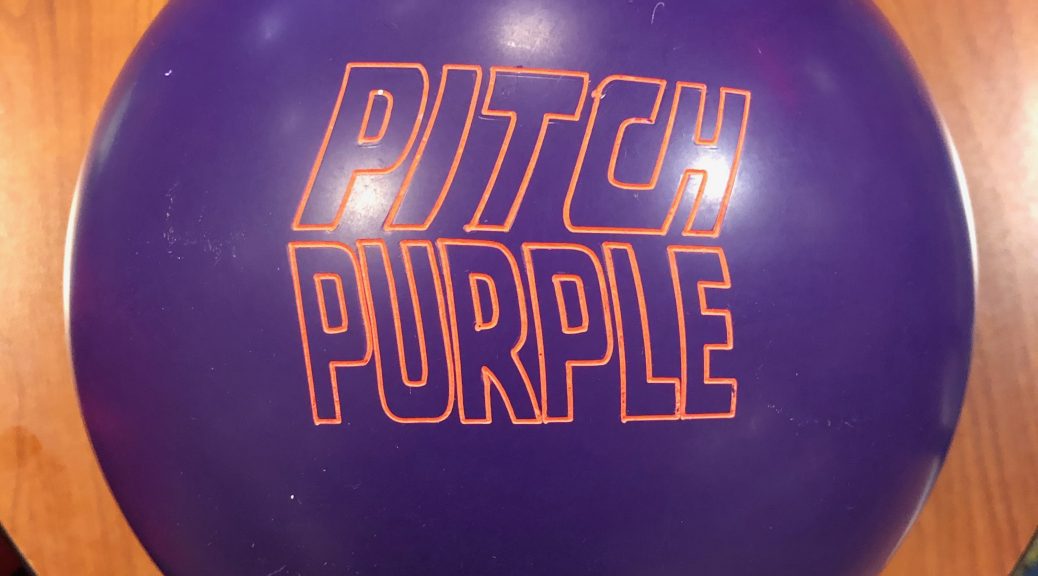 First Impressions
The Pitch Purple feels like a reactive resin tamed down with urethane as opposed to a urethane ball with some reactive content.

Overall
Like the Omega Crux felt like it had more surface OOB than what Storm claims, the Pitch Purple actually had less surface. It definitely didn’t look like 1000 grit. With that said, you can always change the surface to suit what you are looking for. I can actually see maybe a little more usability with less surface for house shots. The big thing for me is that the Pitch Purple felt like a weak reactive as compared to a souped up urethane. In that regard, this doesn’t seem anything like the Hammer Purple Urethane. That looks like much more like a true urethane. The Pitch Purple felt clean through the mids. It doesn’t feel like it churns early and the core certainly will not aid in early roll. This is partially due to it having what looks more like 4000 grit surface. The transition is smooth as you would expect and the downlane motion is like a mini booming motion for me. It allowed me to treat the house shot with more direct trajectories but not that start early and roll for 30 feet look of urethane. Definitely not. So that’s why I felt more weak control reactive than super urethane.

For Sean, this was also a pretty straightforward motion. He is playing more direct and using a little belly like I did. However, as expected he saw stronger downlane motion. The Pitch Purple felt more continuous out of his hands. And with the angle he could generate, he could even open up to where he can get it to come back from 5 where as mine is flagging the headpin. We aren’t clear at this stage how much this ball affects the pattern as the night progresses but I suspect it will have a very similar impact to other urethane. That is to say it will take oil from the fronts and redistribute it to the back beyond the pattern. So that’s certainly a concern for a house shot where you don’t want to make an already cliffed shot lose the backend there would be in the dry part of the lane.

Bryan is next and his first thought was wow and then wow. When we tested the Fever Pitch, he wasn’t a fan. Too weak with over under. With the Tank Blitz, while we saw pretty good results during testing, ultimately he felt like it was too strong so he had to open up the angles which mean he gave away the pocket too often without enough of a downlane move. He got up there, was fairly direct but just saw a nice early smooth roll that had still had shape downlane. He’s pretty direct but maybe a couple of boards more direct than other reactive stuff. Honestly, you don’t see the ball reaction in his hands and think urethane. He had good reaction with a little bounce from the friction and had a little shim which was the only giveaway that this is not quite reactive. But he still can’t throw it out the window on this pattern since it’s a little heavier than typical house shots.

Final Thoughts
We all saw an interesting motion from the Pitch Purple. There are a couple of standout notes. 1, it doesn’t really compare to the Hammer Purple Urethane in case you were thinking that. 2. we didn’t once think, oh this house shot has too much volume for this ball. I’m looking forward to sharing our thoughts on the sport shot where I think it may offer something interesting. The Pitch Purple has a unique look on the lanes. We’ve seen traditional urethane which is early and smooth. We’ve seen attempts like the Covert Tank, Tank Blitz, Fever Pitch, etc. They all have very distinct reactions in my mind. Oddly enough none of them overlap in reaction even while they do overlap in use case to some extent. The Pitch Purple seems to be the perfect ball if you want almost reactive up front and a blend of urethane and reactive downlane. I would call it control reactive…

Sport Shot
We tested on the 40ft 2019 PBA Don Johnson pattern. This is a fairly flat 30.7ml pattern. For me I started where I know this pattern plays for me. I did put some surface on it as the factory is more of a sheen. Generally I can use a medium solid reactive ball with some surface to 8 at the exit point. First ball and I think wow, this could actually work. A so called urethane ball that has that shape? No. This ball gave me about 3 boards at the exit point which honestly is a lot for a sport shot. I can basically hit 7-8-9. What’s interesting is that as I started to chase in, I saw reaction where miss room in was really reactive like but misses out where urethane like. So I started to lose confidence as I got in with more angle. Probably not too surprising but it really had me thinking “control reactive” vs souped urethane.

For Sean he felt a little trapped. He used the factory surface which is more like 3000 sheen finish. It felt a little strong through the fronts where it would read too early but the further he chased in the harder it is to find a spot to work. Margin became razor thin. Ultimately after experimenting, he tried up 4 and really liked that look.

Finally Bryan tests. He started with the factory surface which had that sheen. It was a little tricky to use. He didn’t really have any room. He’s playing a shot 9 to 9 and he has to execute sharply to strike. He might get 1 board in but has no boards out in terms of miss room. When he tries to play further out, it’s still has no play. This is very different from the look he had on the house shot. Here it looked like a weak ball he can’t really use on this volume which makes sense. Perhaps on a shorter pattern or lower volume it would make more sense. He also tried the light 500 pad. He had the same look but a touch less angle at the end of the pattern. So the look didn’t improve for him.

On the Sport shot, the Pitch Purple had a different look depending on the bowler. For me, it felt like a weaker reactive ball that can be used similar to a medium/weak solid reactive from more direct trajectories. Sean could use it but he is more the Sean Rash style bowler who likes reactive most of the time. Bryan is even less likely to use urethane on any condition. But he was fascinated with the look he had on the house shot.