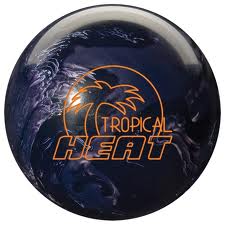 “Tropical Heat, Everyday”
This is one ball you can use everyday on many conditions.

Remember that coverstock accounts for 70% of ball reaction, but the core will create the dynamic shape. Your drilling will alter the shape to suit your game and conditions you bowl on.

First Impressions
Sometimes you know what a ball is going to do just by looking at it. This was one of those times. To be fair, I’m very familiar with the core of this ball, as many may be. I expected this ball to surprise a lot of people with its strength and I think it does. This will be a first ball out of the bag for many people, if you can stomach spending little money on a benchmark ball. My first thoughts is that the Tropical Heats can fill a full bag for someone’s arsenal. This Hybrid is the benchmark. The Solid will be a bit stronger and the Pearl will help you open up the lanes. Ridiculous that a low end line can do that. I hope Storm hasn’t shot itself in the foot by putting such capable balls in the lower end Tropical line.

Price 10/10
My first impression is solidified by the price point. Low end ball that is capable of being 1st ball out of the bag on 90% of house shots. What more do I have to say??

Core
The turbine core is used again. This is a symmetrical core that many ball drillers will be able to easily drill to your liking. If you remember the original Fast and Furious, that was the most recent line to use that core. Storm moved the core to the lower end line to make room for newer equipment. However, this core is proven and so makes sense to keep it around in some variation. RG of 2.55 is on the high side, allowing the core to generate plenty of lope and length before picking up a roll. That allows it to make a defined move on the backend. The core makes a recognizable move. It really fits in the mold of Storm’s typical go long and be strong, if you subscribe to the notion that manufacturers tend to lean in a direction of certain ball reactions.

Cover 9/10
I’ve found that Hybrid covers really can offer the best of both worlds if created correctly. Storm has a history with a very successful hybrid, the HyRoad. If that’s any indication, then we should be in for a treat. So far, this first generation Reactor cover still does the trick and as a hybrid, it really does shine. You can make adjustments to this cover as you wish. You’ll always recognize the overall shape but can tweak it as needed.

Reaction 9/10
I think I’ve gushed a bit early on about this ball’s potential to be a benchmark. In fact, some actually found it a bit on the strong side. This is not a weak ball. It is meant to handle medium conditions and really does cover a wide variety from medium/medium-heavy to medium/medium-light. You can give this ball room or play it direct. The ball motion allows for both reactions and anything in between. As I’ve mentioned, the core is a long and strong type. It’s change of directions is obvious, but not abrupt. It’s not skid/flip, but it is well-defined. The Hybrid cover allows the ball to read earlier and smooths out the transition from skid to hook to roll. However, the small amount of pearl allows it to store just a bit more energy than the solid cover. This ball also doesn’t track a very aggressive footprint, meaning it will not break down the condition as quickly as say a Prodigy, Marvel, or Nano. That’s why you will see bowlers being able to take it out right away and stick with it for a long time if they have a good look in the beginning.
When comparing this ball to the 2Fast, it’s definitely more ball. The 2Fast is cleaner through the fronts, making a later move The 2Fast core has a smoother overall motion. This simply leads to the 2Fast being a step down in board coverage. The Tropical Heat Hybrid is pretty close in overall ball reaction to the original Fast. Given that they use the same core, that’s to be expected. The difference is also as expected, The Fast is a little cleaner through the fronts and makes a slightly stronger move on the backend. Compared to the Victory Road, the Victory Road is smoother overall, but has the potential for a big booming reaction on the backend. When looking at the current lineup, they all have different yet complimentary reactions. The video review will demonstrate the balls in comparison.

Overall 9/10
This ball does more than advertised and at a very low price. It is a really competitive piece and will likely sell quite a bit. It has a ball reaction that many will like. It’s usable quite often. It doesn’t have obnoxious colors 🙂 You have some flexibility to drill it to your liking. This ball fits right in the “middle” of your bag. It just might take up quite a bit of space given what it can do. Potential benchmark for many. One of those balls that a pro shop can easily suggest as a bowler’s only ball if they only had to have one.