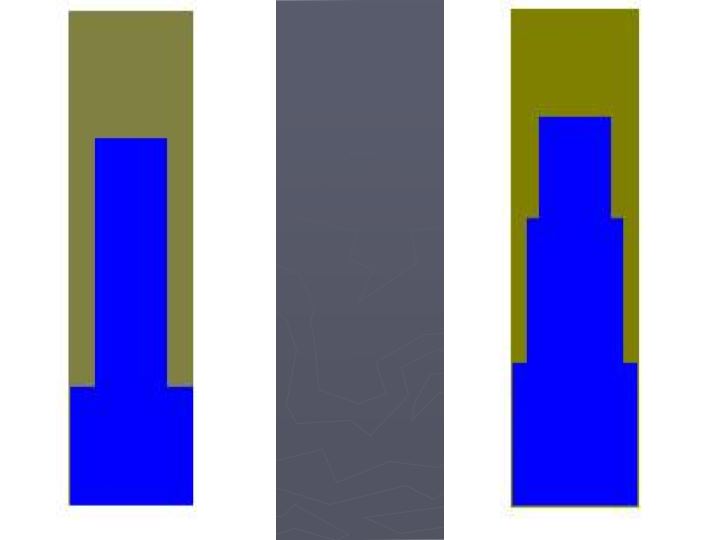 Well, yes and no…

Before this sounds like I am waffling, let me explain.

There are many types of house shots out there, but they usually have some predominant characteristics to help the average bowler score better.  First of those characteristics is a crowned oil pattern, meaning higher volume of oil towards the center of the lane and less towards the outside.  This could be a Top Hat pattern or a Christmas tree pattern.

Why are house shots easy?

The key is the pronounced crown effect. Even if a challenge or sport shot looks the same as the pictures above, the difference is in the relative volume of oil from left to right. While house shots can be as much as 10:1, more challenging shots will have much more even oil spread left to right across the lane. Take the Top Hat for example. It could be 10 units of oil in the middle of the lane to every 1 unit of oil on the outside 10-7 boards on either side. The Christmas Tree pattern may still be 10:1, but it would compare the heaviest section in the middle to the lightest section outside. The difference between the 2 patterns is the tapering of less and/or shorter oil towards the outside for the Christmas tree, rather than a cliff for the top hat pattern. A challenge or sport shot may get down to 3:1 or even 1:1 for the toughest patterns available.

What does this “crowned” effect mean?

Well it’s rather simple really. The pattern is created to funnel the ball to the pocket by manipulating the amounts of friction. Throw the ball near the gutter with any modicum of side rotation and the friction will quickly steer the ball left (for righties). Throw it down the middle of the lane and the ball will float for a very long time, allowing it the ball to get to the 1-3 pocket. In various tests I’ve performed with Digitrax CATS system, I’ve been easily able to demonstrate up to a 10 board span where the ball will still get to the pocket. That is a whopping 1/4 of the lane. Think about it. Throw the ball anywhere between the 3rd and 1st arrow and the ball will be in the pocket.

So I should be scoring big time!

Well, notice I didn’t say strike. Yes you can get to the pocket with relative ease on a typical house shot, but you will not necessarily strike. Carry is the ultimate end-game when getting to the pocket is easy. I will see a bowler throw the ball up 10 and hit 7 at the breakpoint and strike. Then their next ball, they hit 15 to 5 and they leave a ringing 10 pin. The ball after that, they hit 15 to 11 and leave a flat 10 pin. They grow very frustrated, wondering why they just threw 3 “perfect” pocket shots yet only carried one. That’s the trick. The house shot will guide many balls to the pocket that would have never made it there on a more competitive shot. However, it will not give you freebies for carry. OK, it does a lot, but don’t be fooled. Be true to yourself when assessing your shot and you will understand why you didn’t carry all ten pins.
There is a reason why starting to target the 2nd arrow is commonly recommended when you are first trying to read house patterns. That is almost always where the shot will play best, give or take depending on what type of bowler you are. That’s right in the heart of the “track area”, where most bowlers play. It’s also where the pattern tends to change from higher to lower volumes of oil, allowing you to be close to the friction line, driving your ball to the pocket.

Why are house shots difficult?

Carry, carry, carry. The trick is to really find the best line to the pocket that will carry. I’ve had many nights where I will leave corner pin after corner pin. Depending on the type of corner you leave, e.g., flat or ringer, you should then find the correct adjustment. Ultimately, this is the difference between a 200 or 210 bowler and a 220 or 230+ bowler. The 200 bowler will score 650 on good nights and struggle with carry on other nights and not be able to find the line that will carry. They may not even understand what adjustment to make to carry better. The higher average bowlers may score 650 on nights when they “struggle” with carry and huge 700s when they are carrying. They make quick adjustments based on knowledge.

Who benefits from house shots?

Well, in truth almost all bowlers will score better on house shots than challenge shots. Even when there are carry issues, bad shots leave you single pin spares rather than splits. So you pay less of a penalty for an errant shot on THS. However, some patterns will suit different bowlers.

What about the Top Hat?

In my opinion, top hat patterns benefit strokers and crankers the most while tweeners, less so. Let me explain. I’ve grown to despise the top hat pattern, personally. You could guess that I’m a tweener. There are more complex definitions but I will keep it simple for this article. Generally, stroker will have to lowest rev rate, 300 or less. tweeners/power strokers will tend to be between 300 and 450 while crankers will be 450 and up.
When a stroker throws the ball on the outside 10 boards of this pattern, the lower rev rate allows the ball to react slowly and more smoothly off the dry boards, feeding the ball to the pocket. When they target inside 10 at the arrows and breakpoint, the heavier volume of oil holds the ball online with little to no reaction, again keeping it in the 1-2 pocket. Crankers can get deep into the oil. Their rev rate allows them to play in oil as they will be able to create the necessary friction to get the ball to drive back to the pocket. If they happen to miss into the outside dry boards, the ball will almost always make it back to the pocket with usually a very high entry angle. Then you have the tweener. The tweener has too high a rev rate to play in the dry outside boards of a top hat, yet doesn’t have the high rev rate where they can play in the deep blue and get it back to the pocket.

I’ll take myself as an example. I have struggled to be around 220 on a top hat pattern for the reasons I mentioned above. And as a lefty, the pattern will not break down as quickly as it would for righties. So the margin for error has actually shrunk from that of a typical house shot. At the breakpoint, I can not get outside 7 or inside 10. Obviously that is wider than a sport shot, but not as wide as it is on the same pattern for other bowler types.

OK, so enough of the complaining from me… 🙂

How about the Christmas Tree?

This is where I can have some fun. The shot is still tapered, but without the extreme cliff that you see at the 10 board on the Top Hat, I have multiple angles of attack. I get a softer reaction when the ball goes out to 5 at the breakpoint, allowing me to get to the pocket rather than going through the nose. This is where a stroker will have to be more accurate as they will not get as much friction help from the outside part of the lane. When comparing my scoring as a tweener to the Top Hat pattern, I am a good 10 pins higher on the Christmas Tree pattern while some strokers actually have a lower average. The flatter the pattern, the less help you get from friction on the outside.

So is the typical house pattern easy?

OK…yes. It absolutely helps most bowlers get a funneling effect to the pocket. The more times you are in the pocket, the less complex spare leaves you have. However, lower and higher rev rate bowlers will be able to score higher on top hat, while tweeners and crankers will be able to score higher on christmas tree. The flatter the pattern, the more higher rev rates will help. I’m not saying that strokers can not score well on competitive patterns, but they will have to rely on accuracy more than power. I am not out here to push you to become the next Robert Smith (in fact, I’d personally prefer Norm Duke’s game), but rather trying to explain what’s happening out there on the patterns. Hopefully, this will help you understand a little more about reading lane patterns. Perhaps, even allow you to “whinge” a little when you suffer from carry issues.