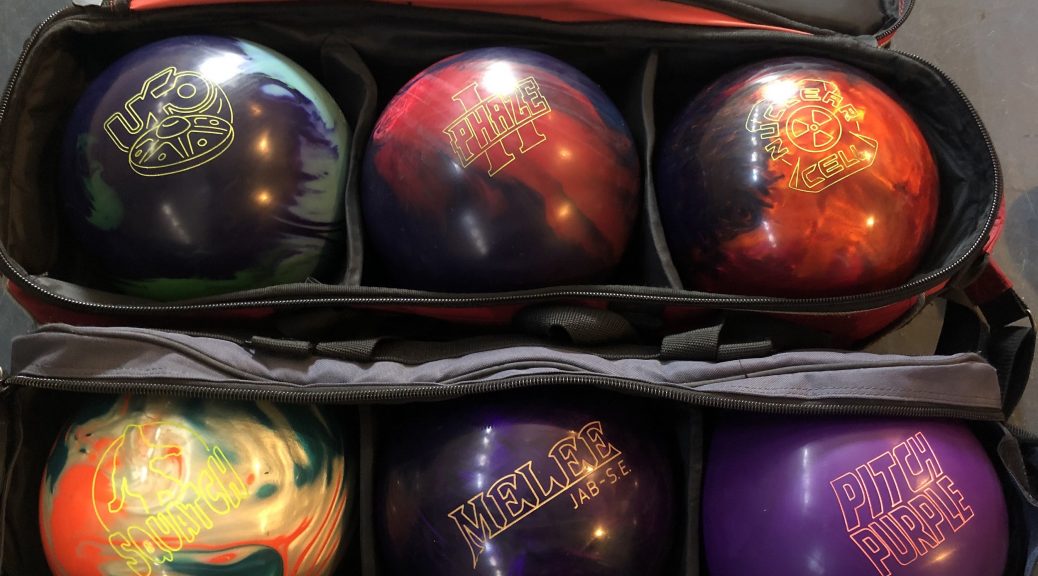 I’m asked frequently what my personal arsenal is. I will preface by saying just because I select a ball doesn’t mean everyone has to have it nor does it invalidate your own personal arsenal. It simply means this is the way I chose to fill the bag to best compete.

I’ve spent some time in the favorite’s series explaining how I create an arsenal and some of my favorites in those categories. Just to refresh your memory it’s composed of the following:

With that said, my bag currently looks like this:

Let’s start with the Strong Defined first. Here I have the UFO. I have alternated the Omega Crux in there at times trying to see if it fits in the same way. I like sanded pearls at the top and have had good experience with this in the past, sanding a Storm Intense. I did have the 900G Volatility in this slot for a while and while I have to admit it was probably heading towards being a huge favorite for a while, it did settle down quite a bit and started to approach the Strong Control category losing some down lane definition. When it was in the bag, it got tons of use week in week out on sport shots of any length. With the UFO or Omega Crux, they get much less use. They have stronger down lane shapes. I just haven’t had as much need for both strong through the mids and strong down lane reaction. That may say something about bag construction and where most use comes in.

Moving on to the Strong Control category which is currently filled with the Phaze II. This slot will likely get a good amount of use for most people and I have no issues here with my selection. This ball fits perfectly and while I have a few balls that can fit here, this is my favorite. The one issue is the Phaze II starts off extremely strong so you have to get about 20-30 games on it. Then it fits in perfectly. I agonized about that but it happened eventually. The Axiom is another easy fit here but the Phaze II is still my pick. The other ball I mentioned is the Volatility. I really like that ball but as it settled, it’s sort of lost its place in the arsenal where the right balls in these categories are the ones I currently have and the Volatility is kind of the odd man out. It may wind up being a specialty ball or an extra ball above the 6 to give me a different look.

The next category, Mid Defined, is easily filled with the Roto Grip Nuclear Cell. It was my number one in the favorite’s video and I love the shape. It’s a stronger shape downlane than I usually like but it’s so trustworthy, it’s kind of a no-brainer. Gets downlane cleaner than the UFO and makes the hard turn. It just works for me. Now remember I do see a lot of balls and I do mix and match brands for my arsenal as you’ll see coming up. With that said, one of my favorite looks in a long time is the Radical Zing Hybrid. When you think about arsenal building, relationships of balls are important. And while I love the Nuclear Cell, part of me wonders if the Zing Hybrid will link the lesser balls better if I fit it in this slot in the future.

With that said, let’s discuss the Radical Squatch Hybrid that fills the Mid Control slot. This is an interesting one for me. I love this ball. It really does an excellent job blending wet/dry from the left side. Despite being shiny out of the box, it just seems to do it so well. I’m not a big fan of shiny in this slot but this ball easily fits here which should tell you how much I like it and how well it works. After initial testing, I tried 2000 surface on the spinner and it really wasn’t happy. Subsequently I decided to go to 1000 hard on the spinner and then Step 1 compound to have a little shine but with good underlying grit and it was back. I’ve run into an issue before with some balls not seeming to like final spinner surface. The Triton Elite was famous for that in my bag before this. By hand surface was a different story. I like the Squatch Hybrid as is for now and despite appearing to be a big stepdown from the Phaze II, it is working in real practice for me. I’ll just add a comment that I really am finding a good matchup of Radical balls and my game. With the way they blend the cliff, they make my life easier from the left side, especially when we can’t break it down and the cliff is very defined.

The next ball covers the Mid Late category and that is the Brunswick Melee Jab SE. I love this ball. I’ve enjoyed it since the original Jab a couple of years back. This slot is not that far off from strength of the Squatch Hybrid for me but when you want to be more direct, the Squatch Hybrid is perfect with the way it blends. The Melee Jab SE might be decent at blending but it really shines when you want shape in this scenario. So it really is a perfect stepdown in my mind to the Squatch Hybrid. Bottom line, it’s not going to blend wet dry quite as well but works much better opening up the lane. Again, in real practice this has worked beautifully in this slot.

The next slot I’ll just call Wild Card has been one I’ve gone back and forth with. Right now it’s filled with a Storm Pitch Purple. For me, I basically plan to use this slot as a urethane ball in case the pattern calls for it while I also use it for spares. However, I’m debating getting a more traditional urethane shape like a Pitch Black, Purple Hammer, or Hot Cell as the shape is easier for me to use as both spare shooting and strike shots. Even the Covert Tank might make it back in the bag as I like that shape a lot.

In the past couple of years, I have changed my arsenal quite frequently, basically on a weekly basis. This has truthfully hurt my scores. I’ve tried to showcase a new ball here and there but as I worked my way through the preparation for the “favorite’s” series, I had my own light bulb moment and at least came to the realization that:1, I need to land on an arsenal with a simple design and 2, if I want to swap, they need to squarely fit in that slot.

For House, on the left side, I stick with this bag (when we are actually bowling anyway). What I work on is how best to manage cliffed shots. So I err towards shot preservation. That means I try to use equipment that will not chew up the pattern and that means avoiding the strong balls which absorb oil from the fronts/mids as well as avoiding low flaring/urethane that will carry oil down and destroy the corner of the pattern. So I find myself working the Mid Control as long as possible and then up to either Mid Defined or down to Mid Late. That seems to work. Of course from week to week things can be different hence the purpose and preparedness of having an arsenal. The last thing you want is to expect that a weak ball works every week and then get surprised by a flood…

I do bowl on sport shots weekly throughout the year and as such, do occasionally slide the scale. In other words, if I’m on a long high volume pattern where Mid Late or Weak may never come into play, I might remove them from the bag and add another ball up the chain. For example, I might bring the UFO, and Volatility in front of the Phaze II just to give me more nuanced shape in the top side of the bag. Or I might also add a short pin ball to add a nuanced shape. I might slide in a Hyroad Pearl if it’s a lower volume pattern where the bottom end of the bag might get more use.

There was a look at my current arsenal construction. Hope you enjoyed the series and thanks for watching.