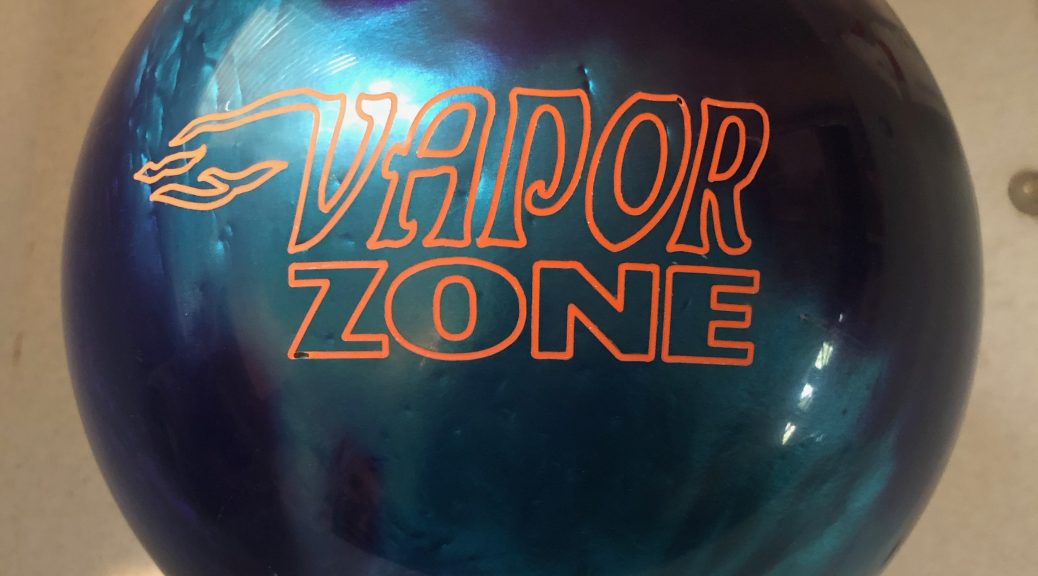 First Impressions
If you’re the nostalgic type, Brunswick offers a pretty new Vapor Zone to add to your arsenal.

Thanks to Jeff Smith and Pure It Bowling for drilling our equipment.
Buy the Brunswick Vapor Zone at PureItBowling.com.
Thanks to Limerick Bowl in Limerick, PA. I want to thank Limerick Bowl for their support. If you’re in the area, don’t forget to visit Limerick Bowl.

Value
B
Generally we like pearl asyms as pretty versatile pieces and the Brunswick Vapor Zone fits that mold fairly closely.

Overall
THS: B
Sport: B
There’s a lot of love for the Vapor Zone. This is another ball in Brunswick’s Vintage line. People are generally nostalgic but things change. If technology doesn’t continue to improve, people wouldn’t quite feel the same way throwing a decade old ball on today’s conditions. So the manufacturers modify the covers to match today’s oil viscosities and volumes to make it recognizable. With that said, I have no personal connection to the original. What I can tell you is what this incarnation offers and that is a clean look with a smooth but angular transition. The more I threw it the more versatile it appeared. I could get to the pocket with varying lines and decent carry. Eventually the ball is too strong to play direct on this house shot as it gets warmer. The ball is clearly an asym and you can see the ball set strongly although it might not be as obvious until you pay attention how it goes through the pins. I found the ball to have varying amounts of continuation so was exacerbating a bit of my own inconsistency. I could play it between 13 and 17 at the arrows. The Vapor Zone did have the angularity to make it back from outside misses but not much continuation. Inside misses do not hold due to that angularity.

Sean was next and he generally saw similar characteristics. The Vapor Zone is definitely angular so when it went, it went and sliced through the pins. He can basically float it to the breakpoint around 7 and the ball came back. It’s a little deceptive and sometimes not obviously angular by eye until you calculate the boards. You can again see some hook set motion from the asym core. Misses in do not hold. Misses out can also just kind of stop. So even with it being on the angular side, it still has a characteristic hook/set motion.

Bryan was next and he had a pretty easy look to the pocket with the Vapor Zone. He couldn’t be more direct than 10 at the arrows but also couldn’t use more angle than 12 at the arrows. The more angle he used the more deflection he saw through the pins. The hook set motion will likely be more effective when there is more defined front to back oil line vs the left to right friction created by house shot walls. With the deflection, he did see his share of 10 pins. Ultimately, this felt more like a medium symmetric conducive pattern.

Sport Shot
We tested on a fresh 39ft Chameleon pattern. For me, 11 to 7 was the ideal line. I could parallel things in to give myself a bit more room at the breakpoint but the ball is a bit clean for the pattern. Some surface would probably slow it down a touch and make it a bit more usable. Nevertheless, it felt like it could be usable on medium sport patterns with the right surface.
Sean was next and aligning with his love of pearl asyms was the fact that he could crush this pattern with the Vapor Zone. He could play as direct as 9 to 5 or could get into 17 to 9. The ball drove harder the more axis rotation he used but had quite an easy time tossing the Vapor Zone on the Chameleon pattern.
Finally Bryan and he also didn’t have a very difficult time getting to the pocket. Yes he’s using a tight pretty direct line 7 or 8 to 8 or 9 at the breakpoint but he’s got a good look. It’s shiny so misses in still didn’t hold and misses out went 60 feet. Bryan and I had to watch ball speed with the out of box surface on this sport pattern.

Final Thoughts
I get nostalgic at times but I wasn’t biased when reviewing the new Vapor Zone as I had never thrown the original. This Brunwsick release offers a pearl asym with some versatility but angularity. I think it would be a little more versatile if it was a touch smoother but then that might change its intent. It felt medium strength overall relative to equipment we typically see. It’s a nice piece that will capture those nostalgic for a motion that was recognizable and successful.