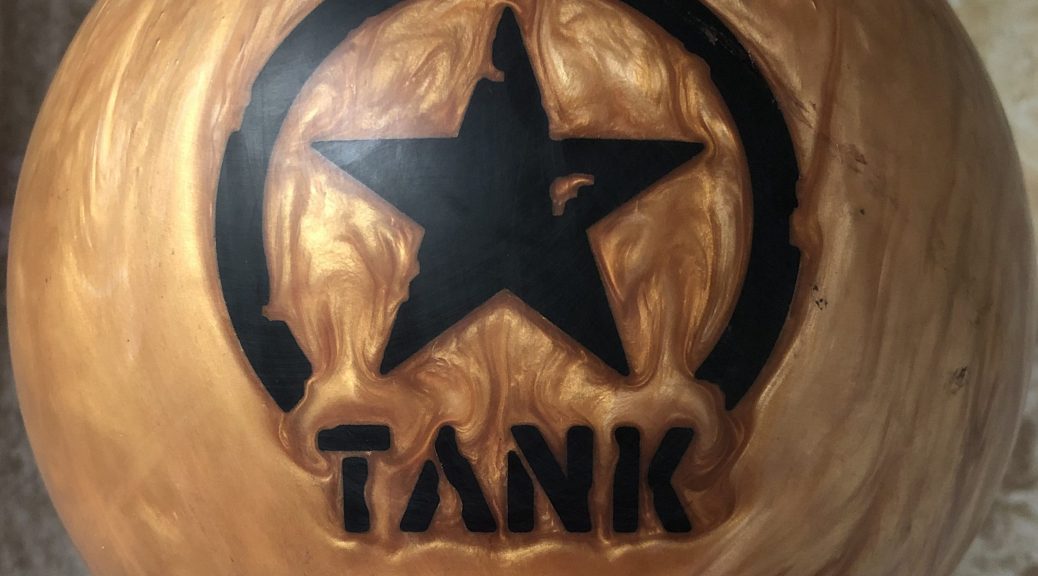 First Impressions
It took us a while to get this ball but I am very glad we finally got to throw the Motiv Desert Tank.

Category
I would consider this ball in the Specialty category.

Overall
We are testing the Desert Tank on our usual house shot. At times, we had to use a lighter condition for some urethane ball tests. Really no issue here. The Desert Tank has plenty of surface out of box and the first game or so, it’s super strong. It’s probably not representative of this ball in reality. So we got the throws in earlier to calm it down. Once you do, it behaves a little more like you would expect a urethane-like ball to behave. I found an amazing line around 9 to 6. This ball straddles the oil/friction wall on the house shot. Getting it left early helps it start up and drive. I could strike for days here so I decided to keep moving in gradually to see what kind of room I have. Moved a couple of boards with my feet, still hits. Moved another 2 going 12 at the arrows to 5 and it actually stone 8s me! Another couple of boards kind of broke the reaction. Basically as I started using reactive like angles, it started to get a bit lazy as you would expect. It might not seem like much on video, but having room to move 4 boards with my feet on the left side is actually massive. Moved back left a couple of boards and got it to the friction early and the awesome reaction is back. Then there’s one that I couldn’t get out of my hand, but guess what, high flush. I miss the simplicity of such a traditional ball reaction, in the sense that you can play shallower angles. It felt a little bit like cheating. With my medium rev rate, I didn’t have to worry about release variations. I didn’t have to worry about being perfect on my targets to get carry out of a urethane ball. It just gave me an excellent amount of room which let me just relax and throw the ball.

Quick comparison to the Thrill to show you how different the shapes are even if in the same area of the lane. Thrill is cleaner of course with a quicker response to friction as you would expect.

Collin Raineri is our higher rev tester and the ball reaction of the Motiv Desert Tank looked just about as good for him. It’s simple where you can stay in front of yourself more or less but you still see good early but angular motion. It’s angular enough to drive well but not so much where you feel it’s going to surprise you through the face. Collin is between the 2nd and 3rd arrow and using lower axis rotation. It’s just the kind of urethane like ball you want to roll forward because it generates angle. It seems surprising with such a low diff but it works. He tries to go more direct by moving right and it did look a bit too strong. He’d have to amp up the speed but it didn’t seem worth it when the look was so good from a couple of boards left. He tried even further right and you can see that he can get it to work. It’s just not quite as seamless for him from that far out. From the left side, that line is more common.

We tested the Desert Tank in the same session as the Storm Fast Pitch so we had an interesting comparison. Will probably do a separate video to compare them.

Now we have Bryan testing. Ultimately, his session looked very similar to mine. Started pretty direct like 7 to 7 and didn’t get reaction. Tried moving right and the ball overhooked. So he did what I did, moved back left but pointed it into the friction more. So trying to get to 6 and then he basically didn’t stop striking. Missing out just seemed to still funnel the ball as did misses in where it just sat. He was surprised at the room he had, at least 3 boards. Once he stoned the 7, he used that as an opportunity to make a move 3 and 2 in but he either left a corner or didn’t get it to finish. Moved slightly back and it was strikes again. So I think the window of move is smaller for Bryan than it was for me.

Final Thoughts
I’m intrigued by the Desert Tank. I have grown very leery of a dedicated spare ball and feeling like some sort of multi-purpose specialty ball should fit in the bag there. The Desert Tank could be that ball. Ultimately, it is capable of being played like traditional urethane and gives more room because it’s capable of angle. Time will tell if the reaction will hold up.