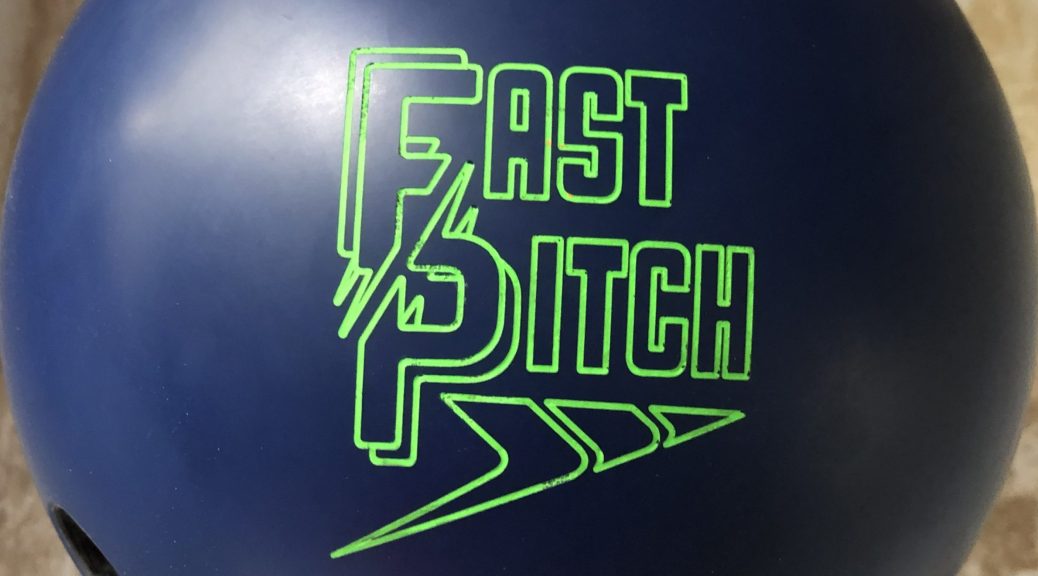 First Impressions
At first I was thinking, how can I possibly use the Fast Pitch. Then I figured it out and thought wow I could do some damage with this thing.

Category
I would consider this ball in the specialty category.

Overall
First shots I’m thinking urethane, go straight. Ring 7. Push the breakpoint in, puke. I’m not feeling good. Then I thought, ok push the urethane ball into the early outside friction and holy moly did the Fast Pitch come to life. Once I did that I literally did not stop striking. It is obviously urethane but doesn’t feel like it bites super hard in the front part of the lane like the Hot Cell or a fresh Pitch Black. But it’s still got a pretty early roll and the long walk to the pocket. And while occasionally you get that deflecting hit through the pins, this one really kept driving. I certainly wouldn’t call this a reactive reaction but it really walks in and drives well. I felt lined up and could strike for days. I was thinking to myself I couldn’t remember the last time a ball made the house shot feel this easy for me. I had been thinking for some time, I need a ball that has an old school reaction for when conditions just get stupid and you can visualize a ball that you can play in the friction but will still have a smooth roll up into the pocket. I was envisioning a circa 2000 era dead reactive ball but the Fast Pitch really looks like it fills that spot. Really does remind of the old school blue Hammer and I imagine that isn’t a coincidence. I watched back the Pitch Purple review and I was a bit trapped. It was too strong to play in the friction like the Fast Pitch but it was a little too soft from in. I could get to the pocket no problem. Just didn’t get the consistent drive. It was the one I thought could prove to play like the 2000s reactive I mentioned but it really didn’t. And while I would say neither does the fast pitch, that reaction just would be something I would love to park with for days. However, the line won’t hold up forever and that’s always my issue with urethane.

For Sean, the reaction looked just as spectacular. There isn’t a whole lot to add that I didn’t say already. He goes second arrow to the friction and the ball just trucks back. What’s interesting is he tested first and the ball looked so good for him. And when I first started, I mentioned how I was very surprised by softer reaction until I figured out how to play a urethane ball. Usually higher rev guys look really good with urethane because they can whack on it and still have controlled backends. Low rev bowlers can sometimes use urethane in the friction and get the ball to walk. Recent urethanes or urethane-like balls can be too strong in the friction and not strong enough when you find oil through the fronts. But truthfully, my ball reaction and hit looked easily as good as Sean’s. He did area check to prove it’s urethane and…it is.

Bryan was next. He found the Fast Pitch was a little earlier responding than I saw. We tested in the same session as the Desert Tank and that seemed to push a bit more. He tried different things and settled on standing 18 pushing the ball to 6. This gave him the best look. It really felt like a traditional urethane look for him. If he missed out the ball did overreact as opposed to just sitting. Misses in are a bit lazy. As he moved in, the ball hit softer. He found that the ball kind of telegraphed his release since it doesn’t add anything. So marginal shots would give marginal hits and good shots hit well. Ultimately, I wouldn’t see this ball as a regular in Bryan’s arsenal. We’ll do a separate comparison to the Desert Tank.

Final Thoughts
I’m not usually jumping out of my shoes to test a urethane ball but have felt like there is the occasional need for it. Then came along the Storm Fast Pitch and now I’m thinking this could be very useful. My 6th ball in the bag is usually either a dedicated spare ball or a specialty urethane/spare combo. The Fast Pitch is the exact type of ball to fit in that slot.