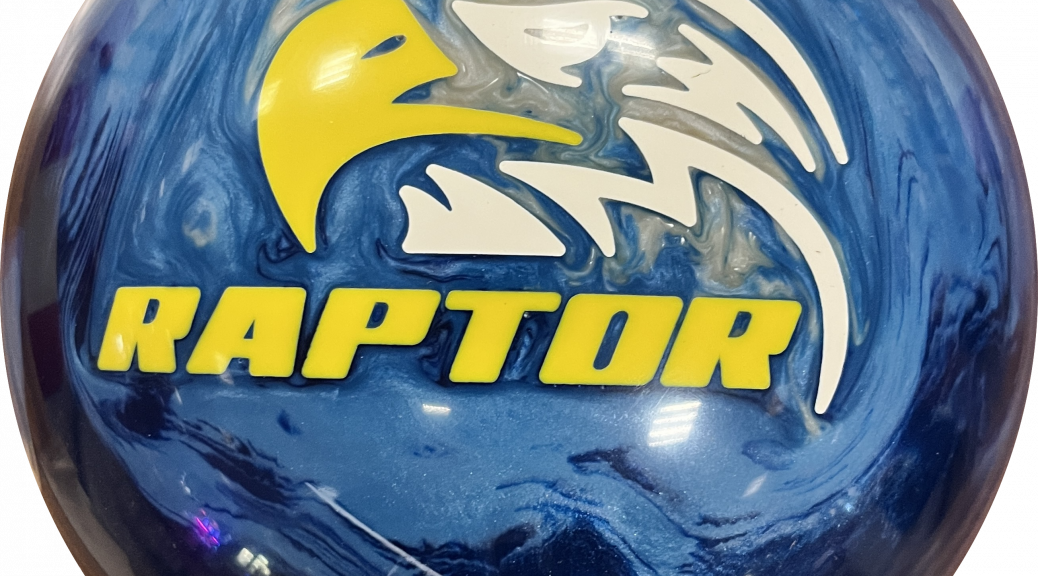 First Impressions
I’m happy to report the Motiv Sky Raptor fits where Motiv says it fits in its ball guide.

Overall
Let’s see if we can get right to the point with the Sky Raptor. The Affliction core is a big symmetric core. It is dominant in that it flares and wants to right itself. Regardless of symmetry, it is very strong. Motiv wraps it with a new cover called Dynamic Infusion Pearl. It’s a pretty big step up from the Infusion formulation in that it has a lot more teeth. Despite having that shiny looking 5000 LSS finish, the thing is not only responsive but wants to roll quickly. This reaction very clearly fits in the top line angular part of the ball guide. It’s also clearly in the Mid Defined category. You could say that steps on the toes of the Mythic Jackal. The Dynamic Infusion cover on the Sky Raptor has a bigger footprint so it almost looks like the reaction of a shiny solid, like it has grip but you get a little length when it would otherwise hook too soon. The other thing though is that it still is quick responding. For sure one of the quicker responses which creates strong angle. Now add that big core and I kind of felt like I had some over/under on the house pattern. The heavy core sometimes would roll out and leave a flat corner but still also overreacts from the outside friction. You can throw it fast and direct and get that big hit but with my normal release, I felt a little in between in that 3rd arrow zone. All the stuff I mentioned earlier which ultimately meant I needed to get a touch deeper. Really, the more ideal situation was to use more oil but not being crazy deep. The big core bleeds a touch too much energy for huge side to side motion. Bottom line is this ball really will be better suited to more volume overall.

You can immediately see the difference between the Sky Raptor and the Iron Forge. Even while the Iron Forge also has the huge Detonator core which isn’t much different spec wise from the Affliction, the Dynamic Infusion is way stronger and more responsive to friction than the Infusion. So there is no doubt the Sky Raptor fits in Mid Defined while the Iron Forge is Mid Late. Iron Forge still has that roundish booming shape which really is in contrast to the Sky Raptor which has a sharper reaction while also being stronger. These are more like second cousins if you had to relate them.

I think a lot of people will like the Sky Raptor but you want to keep it for a little more volume to take advantage of how strong the cover and core are. There, it will be an enjoyable piece.

A Power Player’s Perspective
For Tyler, the Sky Raptor looked great. Yes the ball has the same characteristics. It’s a strong heavy rolling yet very responsive ball. But it even looks more hook set for Tyler. The fronts and mids seemed to matter very little. We talk about balls having 3 stages, skid, hook, and roll. This ball looked like it was simply 2 stages, skid, and flip. So the hook stage was aggressive and very quick. The ball looked to have a very clear hook set but man did it look good. He got matched up and lined up pretty quickly and was able to get in relatively deep before it finally ran out of steam. You can still see the heavy roll. I know the logos can sometimes trick the eye but you can really visualize the heavy roll from that tumbly core. In terms of miss room, missing out was forgiving until he was too deep. Missing in didn’t really ever hold. Just seemed a bit too strong.

A quick look at the Iron Forge and just like for me, he got a cleaner and slower response or a more rounded delayed response. He had to square up to find a good shot but that again validates that the Sky Raptor is clearly Mid Defined while the Iron Forge is well down stream in the mid late category.

Stroker’s Stance
Next up is Bryan testing the Motiv Sky Raptor. Historically, we’ve tested many big Mid Defined balls which are typically shiny asymmetric balls although not always. In many cases, I would see a ball that fits right in while for Bryan, these balls tended to need a little more oil pushing him in but then the hook set nature didn’t allow the ball to return with authority, leading to lower carry. Given that Tyler and I have clearly placed the Sky Raptor in the Mid Defined, there was a little anxiety and interest to see if it will debunk the history of these type of balls. Well wouldn’t you know it, Bryan got lined up quickly and could strike for days. You can very clearly see the hook set nature again. It goes and then quickly responds and turns over. So this lane had the perfect volume and pattern blend for a great match up. The ball set just right and just drove very strongly through the pins. Very little deflection. Now the challenge of moving in still existed with this type of ball. As Bryan started moving in, it pretty quickly lost motion. So now it would set but a little less entry angle, causing deflection and reduced carry.

Looking at the Iron Forge, it is definitely rounder and a little later. I think that rounder shape probably means possibly a nit more usability but on lower volumes

Final Thoughts
The Motiv Sky Raptor is probably the quickest responding pearl ball from them to date at least in our hands. It’s got a big rolly core that seems to turn over hard as well. So clearly a Mid defined ball in the bag. Get it on the right volume and it will look great. If you force it on the wrong condition, you may be in for an over/under play. Its sharpness may wind up limiting it’s use case as well. So hopefully we armed you with enough info to decide if you will give the Sky Raptor a shot.