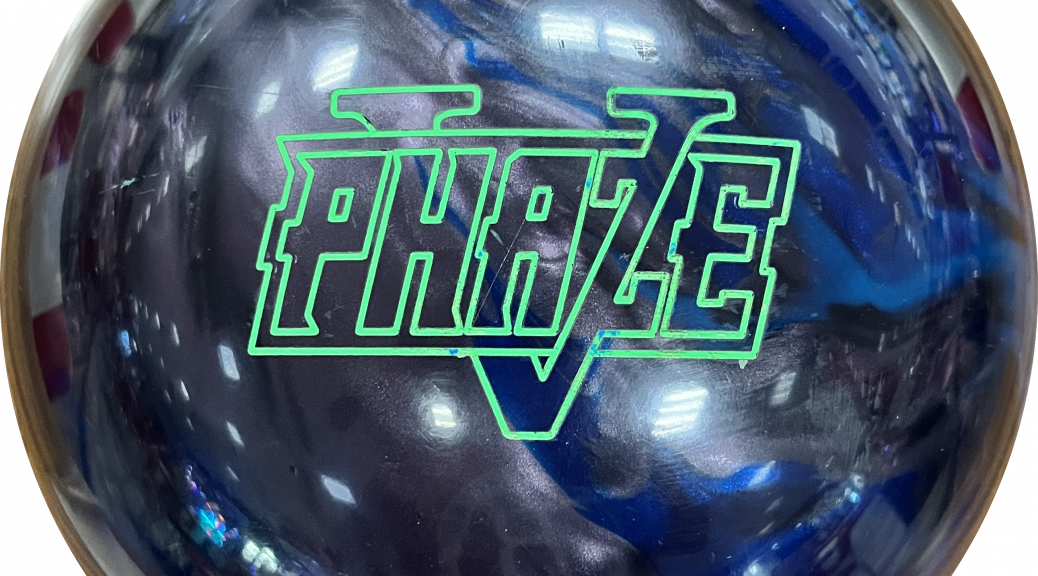 First Impressions
The Storm Phaze V is just as good as the Phaze IV it replaces, maybe even a little bit better. Shiny covers are back at Storm.

Overall
OK, I pretty quickly spilled the beans on the Phaze V and it should be no surprise considering it is the same coverstock and core as the Phaze IV. I will try to avoid repeating the previous review. The Phaze V was really easy to toss on this walled house condition. There are some characteristics that aren’t always conducive for shiny equipment like this, especially from the left side. Quick response can lead to overly strong reaction from outside while floating in the oil inside. The R2S is a pretty responsive cover but does take on a bit more of a booming shape off the friction as opposed to an absolute hook set reaction. So when you hit the friction it does push just a touch but is still quite responsive. Still gives you some ability to manage it from the friction but watch your speeds. The nice thing is that with the big Velocity core, the ball looks great from deeper breakpoints. So despite the shiny cover, the core gets going and still does a great job returning to the pocket and carrying. I could move quite a bit on lane and find the pocket. So ultimately it rolled just like the Phaze IV.

The question for me is where does this fit in the arsenal? Well I’ve said it before most balls with R2S pearl work their way down in my bag to the Mid Late category. I think this is no different. R2S just doesn’t have enough bite to handle a little bit higher volumes despite the big Velocity core. Phaze III made it to Mid Defined and while this isn’t massively weaker, it’s got just a bit lower bite to push it down the bag a bit.

Final Thoughts
You can still see the Infinite Physix fit in the Mid Defined category being a bit stronger than the Phaze V. I’ll have a separate video on that as well. You can also see that the Night Road is less ball overall than the Phaze V. Reaction shape wise, the Infinite and Night Road are siblings while the Phaze V is a first cousin. They’d fit like this in the bag: Infinite Physix = Mid Defined, Phaze V = Mid Late +, Night Road = Mid Late. You then have to decide if you need all 3 but I think you can get away with 2 of these.

Phaze V vs Infinite Physix vs Night Road
Let’s take a look at it next to the Infinite Physix and Night Road. Infinite and Night come with NeX pearl which is a bit toothier cover. They also have some out of box surface at 4000 abralon and 4K fast respectively, however they are a bit lane shined now so not very different from the glossy Phaze V. You can still clearly see the smooth strength of the Infinite Physix. Still mister reliable in the bunch and strong enough to be in the Mid Defined. Two ways to tell. You get some flat corners when the volume is lower and you aren’t deep enough. And it can make it back from deeper than the Phaze V as it stores more energy with more volume. Shape wise, it doesn’t really feel like a distant relative but more a first cousin. Just a little less and a touch cleaner/sharper. Now the Night Road has made my bag as a Mid Late so that is the truer competitor in terms of slot in the bag. However, for as much as the Infinite Physix is stronger than the Phaze V, the Phaze V is stronger than the Night Road. Not more obvious that the sort of flat pocket 7-10 from the same area. Once I move 3 boards or so left and straighten things up, the Night Road stops deflecting and driving through the pins. So we are seeing a scenario where the Infinite and Night Road are siblings, with the Phaze V a cousin that sits in between. So the bag could look like Infinite Mid Defined, Phaze V Mid Late +, Night Road Mid Late. Do you need all 3? I think you could get away with Infinite and one of the other ones. But it does give you something to think about.

A Power Player’s Perspective
So we now have Tyler testing the Physix V. He didn’t get a chance to test the Physix IV so there isn’t any perspective or bias coming in. He immediately liked the smoother rounded shape of the R2S cover on this ball but distinctly didn’t like the over/under at the pins. So if I had to nit pick here, the Reacta Gloss finish was going bye-bye. It took a couple too many 10 pins to see the ball just needed a bit of bite. So we took a 2000 pad and ever so gently scuffed to just get the high gloss off. You can immediately see the difference. Nothing major other than now it carried the corner every time vs leaving it. Same shape and so now, the carry supported what Tyler enjoyed with his eyes initially. The sort of longish motion but the rounded booming response to friction. This is an important case in point. Do not be afraid to alter surfaces. This very small change with a handy set of abralon pads turned the Phaze V from an unusable ball to a carry monster all while looking identical every else on the lane. The difference is so subtle but that maybe 1/2 to 1 foot earlier read had such a huge impact. Tyler could strike for days with that rounded reaction that his eyes liked and therefore could get very comfortable throwing. The interesting thing is the comparison to the Night Road. I talked about both of these balls being Mid Late and they are for Tyler as well. However, he still had a preference ultimately for the Night Road. While he had a great look with the Phaze V, he actually had slightly opposite situation than me in terms of ball strength. Because of his rev rate, he didn’t lose any strength with a weaker Inverted Fe2 core. However, we know the Night Road cover is stronger which ultimately meant more teeth, more movement overall and a bit more reliable look to his eye. So while he saw a bit more strength with the Night Road while I saw a bit less, I think the end result of our preference was the same.

Stroker’s Stance
Bryan was next with the Phaze V. For context, the Phaze III remains in his bag as a Mid Late type ball. It has been a very reliable motion with a clean look and strong downlane motion. When Bryan finds a ball that has a consistent and driving hit through the pins, it’s staying in the bag. That goes for the Zen and Marvel Pearl for him which are still in the bag. So in a way, he would have some idea or at least hope for the Phaze V ball motion. As Tyler and I saw, the Phaze V was consistent in that it had a rounder shape overall. He had just tested the Sky Raptor and the hook set feature of that ball was very distinct to the smoother rounder shape of the Phaze V. In fact it was so much smoother it almost looked earlier but I it really wasn’t. The R2S just has a different characteristic which a lot of times allows it to be more usable. So he could play the same line and get the same result, albeit with a very different shape. There is still a possibility of over/under if you aren’t careful. The ball could still start too soon if you grab it and over hook. It could also fluff if you don’t get it enough. But generally there was a decent space to play with. The other thing was that because of that rounder shape, he could move in incrementally and still get drive through the pins. So not having a hook set motion helps give Bryan way more room to move. It’s the reason why the Zen, Phaze III, and Marvel Pearl are in his bag. The symmetric shiny balls tend to give him more room to play.

Final Thoughts
All in all, the Phaze V is a good ball that would fit in the Mid Late part of the bag for almost all style bowlers. It may be on the stronger side or weaker decide depending on your style but the R2S pearl’s medium strength ensures that it’s preference will be for a bit medium to lighter conditions while the big Velocity core gives it some consistency. Don’t be afraid to change the surface, it’s probably the biggest change you can make. Good luck deciding what you want to put in your bag in this category!