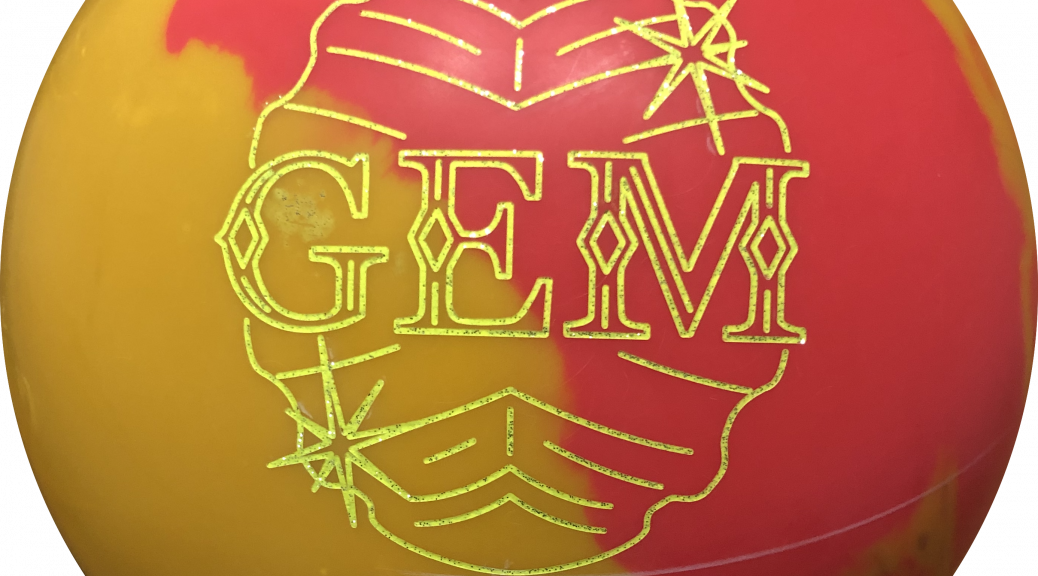 First Impressions
The Roto Grip Gem replenishes the sort of empty top line Strong Defined slot in the line up.

Overall
The Roto Grip Gem is somewhat of a simple formula. Huge core in a huge cover makes for a new strong defined ball in the lineup. The last big ball was the UFO which had the Microtrax cover. Very similar core specs as well. However, the Gem revives the core shape from the original Defiant we enjoyed so much. The planes in the core created somewhat of a unique motion. This is ultimately a nuance but the key is it fits clearly in the strong defined box. The big microtrax aggressive cover means it does read the lanes fairly strongly but not super early while smoothing the transition a bit due to the read. But it doesn’t feel like it’s reading at your feet which is good. I was on the fence about the colors but I understand it will have some shelf appeal. In terms of ball reaction, the color helps you see how the core is transitioning itself. It’s righting itself from the midlane but still has some noticeable response to dry. That helps accentuate the asym nature and strong move down lane. The Gem worked amazingly well on this house shot. Think about the house shot design. Heavy friction outside and heavy oil inside, meant to provide massive forgiveness. While the Gem was a bit too much for me personally from direct, once I got close to the 3rd arrow, I can make it work anywhere to the 5th arrow. The ball is responsive enough to cover boards, big enough to manage the heavy oil in the middle of the lane. So pushing it to the friction doesn’t yield reaction death. You just get a blending where the ball is transitioning and slows down just enough to still work. Stay inside in the heavy oil and the Gem couldn’t care less. It just responded like it was nothing.

2-Handed Style
Here are a few shots throwing the Roto Grip Gem 2-handed. First thought, yes it’s very strong. Unless I had a bit more volume, as a rev dominant bowler I’d probably not think I need this much ball on this particular shot. While it had a very blendy characteristic as a 1-hander, I don’t project as well as a 2-hander so the ball wants to go. But I can see a 2-hander with more speed seeing the same benefits I saw as a 1-hander, a ball that blends the walled pattern and opens up the lane quite a bit. What you see here is a heavy rolling strong defined ball. I can’t miss in as it never fails to hook but I also had some miss room out. The colors will be a love or hate thing but what I can tell you is it shows me exactly how I rolled the ball. If you need a strong defined ball in your bag, The Roto Grip Gem is definitely one worthy of consideration.

Stroker’s Stance
Bryan tests the new Roto Grip Gem. As I mentioned in the primary review video, the Gem is a strong defined ball. That is also true for Bryan. You can see the typical characteristics. Surface, strong read and strong transition leading to a very nice look to the pocket. Bryan saw similar to what I saw, a nice blending of the over/under of the walled house shot. It wants to transition regardless of the pattern and the appropriately timed transition led to good carry anywhere left of the 2nd arrow to the 3rd arrow. It responded strongly to friction but again controlled the oil in the middle of the lane very well. However, as Bryan moved past the 3rd arrow, the Gem’s reaction went away. What was once a strong transition looked kind of DOA. It lost energy and didn’t have enough to cover the boards back. Even if he pushed it to the friction, it just didn’t have the appropriate energy retention to make it back. However, when he moved back to the right again, there it was. Back in business. The reaction ultimately looked quite good for him.

He had a chance to compare to his Nova. That reaction looked really good for him and has made it into his bag. Now let’s take a quick look at the chart. Both balls are in the strong defined category. You will not that the Gem is a little stronger while the Nova is a little more angular. I try to make the overlap clear. If you watch the shots, you’ll see how close they are but there is a discernable angle the Nova has over the Gem. Just a touch cleaner. You could argue the factory finish accounts for the difference, they are so close. No reason to have both unless you separate the surfaces even more than factory but both are easily worthy of the strong defined slot.

Final Thoughts
Sometimes you might think really strong pieces are overkill for house shots but sometimes they provide the right balance where they take the over/under out of play as the strength simply blends everything. The ball is righting itself into a roll, regardless of the pattern. The Roto Grip Gem was a star on the house shot for me, plain and simple.

Sport Shot = Sphinx
It was totally worthwhile seeing the Roto Grip Gem on a pretty flat sport shot. Sphinx is a 2:1 40 ft sport shot. My first instinct was a ball this strong might not make a lot of sense. Sometimes “defined” shapes plus high strength is simply too much for these medium patterns. Boy was I wrong. The Gem really showed off its versatility. Now I already know the Idol Helios works really well for this pattern so strong control seemed the ticket. However, even though the Gem is more defined, it did amazingly well, just seeming to know how long to go and when to turn over. It happened to be a very nice match up but I can’t argue that the big shape gave me a great look. It’s even more overpowering than the Strong Control which gave me a tiny bit more margin on a very tough pattern. This pattern shape yields a narrow sweet spot and you can see what happens when I’m there. I can edge in but you see how flat the pattern is and how difficult it is to get a ball this strong to clear long enough to stay left of the headpin. So go back to the sweet spot and the Gem is just right.

Bryan also tested the Gem on Sphinx. As I saw, he also enjoyed a really nice ball reaction. He felt that it was more versatile than most dull aggressive balls we have tested. He had shape and good pattern control on a pretty tough pattern. Just inside the 2nd arrow was the ideal spot for the Gem. But he was surprised to find he could also get into the third arrow and have good pocket control. Again, he compared to his Nova. It’s similar to house but the additional angle the Nova created was noticeable and allowed it to get even deeper when needed.

All in all, we were quite impressed with the Roto Grip Gem on a pretty difficult pattern.