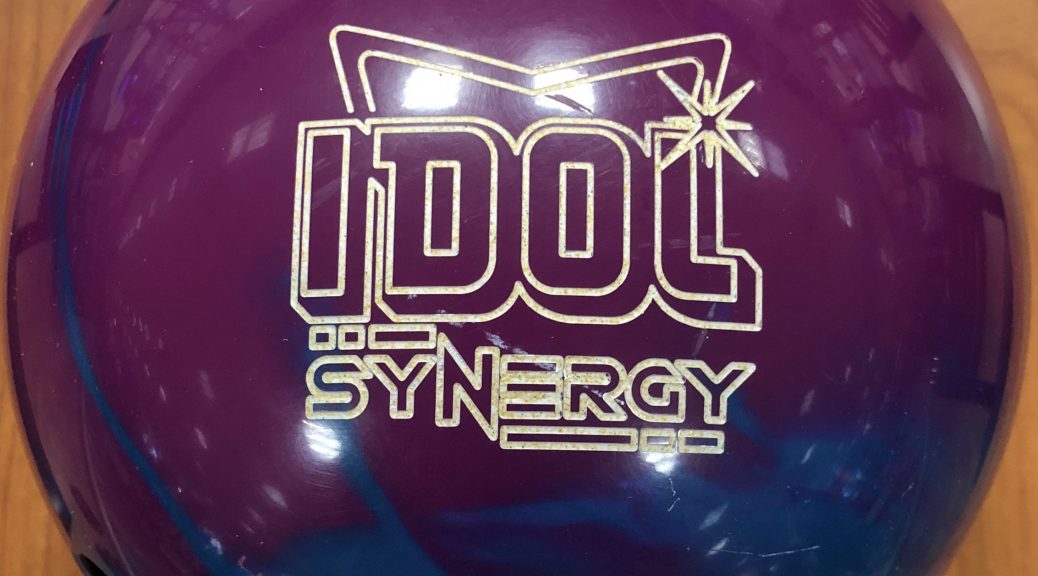 First Impressions
The Roto Grip Idol Synergy is a pretty ball with a smooth benchmark like ball reaction.

Overall
We get another ball in the Idol saga, this time in an eTrax Hybrid coverstock version. We’ve seen how often the Idol has been put to use on tour. We’ve also seen the Idol Pearl used significantly. It’s a basic core design that is clearly effective and has a smooth shape. I personally found the Idol Pearl a bit more usable with the cleaner and more angular motion from the eTrax Pearl over the original Idol. That stronger cover was very smooth with great pocket control but I always had carry issues with it. Does the Idol Synergy look more like one or the other? Well yes and no. This one is a little more like a benchmark so a little smoother than the Idol Pearl as you would expect but more punchy than the silky Idol. I’ll firstly apologize for the lack of posting shots as I had some physical issues. Nevertheless, I tried several different lines and did find looks from many parts of the lane. I can float it out to the dry and it responded well for the most part. Sometimes not. If I pulled the breakpoint in, it was smooth and just sat and hit well. But it felt like the cover could use some surface. It would take away some of that over/under. What I can say is this could be a very nice benchmark, it’s a shape I really liked watching going down the lane. I would like to touch it with some surface and see if it just smooths the edginess off a bit.

Sean was up next and if you watched the recent videos with the Proton Physix and RST X-1 you’ll see that the Idol Synergy is clearly less ball as expected. It’s clean and much simpler ball reaction, as you would expect from a middle of the road ball. Sean played it around the 2nd arrow and even more direct. Pushing it into the friction to the outside seemed to soften it up a little bit so he tried pushing the breakpoint in and it responded too hard. He tried to move in and he would see a good reaction and then not so good. Again, I think the shape of this ball is very pretty but a little surface will probably improve that over/under.

Now Bryan takes his turn. The Idol Synergy was even a little trickier than what Bryan and I saw. Again, there’s no denying the smooth benchmark look from the Synergy but I’m not sure this ball syncs up here. For Bryan, this ball needs more friction and a stronger ball would be more effective. It just looks clean but also not responsive enough. When he tried to straighten it up, it over responds. He had to play around with angles quite a bit. It’s just too much work but here we want to show you what the ball is about so we spend the time to find it. He tries to push it to the friction and it kind of quits. He had to move in but also pull the breakpoint in a bit. A quick look to compare with the Idol Pearl and while it is his light oil ball for Bryan, it has more down lane punch over the Idol Synergy.

Final Thoughts
So what do we have with the Roto Grip Idol Synergy? For Sean and I, this ball could fit in the Mid Control category. That’s where a typical benchmark ball can fit. I do think cracking the polish will be needed to see a more consistent reaction and I may have to run another session with the surface change to validate that. That over/under needs to be tamed. For Bryan’s game, I think the Idol Pearl is the better ball. Ultimately each bowler has to decide what ball fits in their arsenal and I am hear to arm you with as much information as possible to help you decide.

Surface Adjustments
We decided to run a quick review after a surface change. Went 1000 grit and then 3000 grit abralon. This should help the ball read a bit sooner, hoping to take away some of that laboring behavior we saw out of box. It made the ball a bit stronger which is logical. More texture meant moving in a bit was better suited to the ball reaction. The reaction did seem more consistent. However, it still comes as no surprise that it still shapes the same way and pushing me in meant increasing the risk of flat hits incrementally.

Sean gave it a shot as well. Honestly, it did feel almost transformational for him. He couldn’t miss. So it went from good pocket control with some over/under to great pocket control with great carry. It is clear that the higher rev rate and speed can take better advantage of this balls motion and extra traction.

Finally Bryan and for him it was slightly better but certainly not night and day. The extra surface really just pushed him more to the left to catch more head oil but that just meant more boards to cover. In the end, it was more or less the same reaction, just from deeper. So pushing it out was a little lazy and trying to hold line sometimes went high.

End of the day, it’s still the same ball. I guess what I’m saying is it wasn’t exactly transformational to put that bit of surface. Well for the higher rev higher speed bowler, it made a difference. For me a little less. For Bryan, even less so. But at least we gave you an opportunity to see the change.