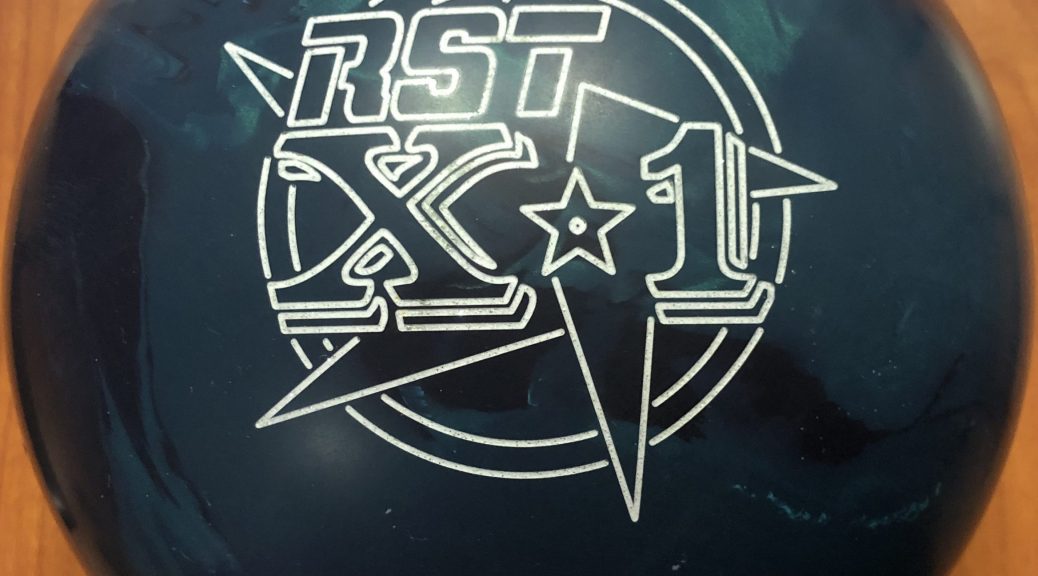 First Impressions
Roto Grip is bringing us another big asym. The initial feel is this could fill a slot similar to the original Physix but a bit of a different shape, but is that a good thing? More on that.

Category
This ball fits in the strong defined category.

Overall
Alright, out of the box, the RST X-1 is a strong ball with lots of surface. When a ball is released with that much surface, you know the intention of it. On paper, it’s has the specs of a core that should be pretty versatile. I actually like when a big asym has a little higher RG than typical but what does it do on lane? First thought is it’s on the rounder side of the asym spectrum as compared to say the Proton Physix which stands up pretty aggressively. So they start to read at the same time but a different shape down lane. And whereas the Proton Physix felt like it does it’s thing regardless of release, this one seems more amenable to hand position changes. I actually think that makes the RST X-1 much more release sensitive. I also thought about how this sits next to the Rubicon. That ball felt very strong and more of a strong asym than the specs would have you think. How do they fit then? This is where the Physix discussion comes in. With less surface, I think this ball will actually be more usable. It’s almost like this much surface is not the ideal match up for what this ball wants to do. And as I mentioned in the Proton review, the OG Physix was somewhere in between Strong Defined and Mid Defined. I think with the correct surface, that’s where the RST X-1 will fit. With a little less surface, I think it will just store a touch more energy making it shape a little better in terms of supporting carry. It’s just a touch too round.

Here’s a little 2 hand view. Again, early days to critique the technique but I can tell you that because the ball is a little rounder, I had an easier time managing to work with the Roto ball vs the Proton Physix. I actually really enjoyed throwing the RST X-1 as a 2 hander. Because it doesn’t have as strong of a stand up nature as the Proton, I had a much easier time getting it to the spot and not overhooking. I know they have the same surface and the pattern is the same so the rounder shape really helped keep it on the left side of the pocket. I can see this ball make sense for the higher rev bowlers as the top end of the bag where you wouldn’t need something as strong as the Proton Physix.

Sean was next. His ball reaction looked pretty good but it was a bit of an odd session if I’m being honest. Just watching the ball reaction, you can see how nice the rounded shape looks. Almost feels like a strong Storm Allroad but therein lies the problem. He either strikes or leaves a 10 pin and it was dutch like clockwork throughout the test session. He had a look again anywhere between the 2nd and 4th arrow. Again, Sean has very good command of axis rotation and speed. Yet, the Proton Physix with the more stand up nature just seemed to create better drive more consistently. Here again, I feel like a little less surface would allow the RST X-1 to continue a little better. I can’t argue that it needs more volume as we had no issues getting the Proton Physix to work. But with this particular formula, either more volume or less surface will probably help it match up better.

Last but not least was Bryan and his shot to see what the RST X-1 can do. Where I was a little concerned that Bryan might find this one more tricky, he actually found it easier to use. He felt like it was a little cleaner and a bit more angular. And for him, it was a benefit to be able to manipulate hand position to get the ball to do what he wants it to. He was 2 and 1 right from where he was with the Proton Physix. Bryan felt fairly comfortable with this ball and he had a good look. That rounder shape seemed to suit his game a little better. If he wanted it to boom more, he just got around it. If he went straight through it, it started earlier and smoothed out. It just seemed to work.

Final Thoughts
I initially kind of saw the Roto Grip RST X-1 as another big asym. The more we threw it, the more we understood it. It’s a little more of an all-rounder big piece than just top of the heap. That makes it a little more tricky in terms of arsenal placement if I’m totally honest and that’s where the mention of the Physix comes in. A lot of people liked the Physix as did I but I had trouble placing it because it wasn’t strong enough to be strong defined nor clean enough to be mid defined. Yet I believe a lot of bowlers will find this spot very useful especially since we don’t see huge volumes on typical house shots.