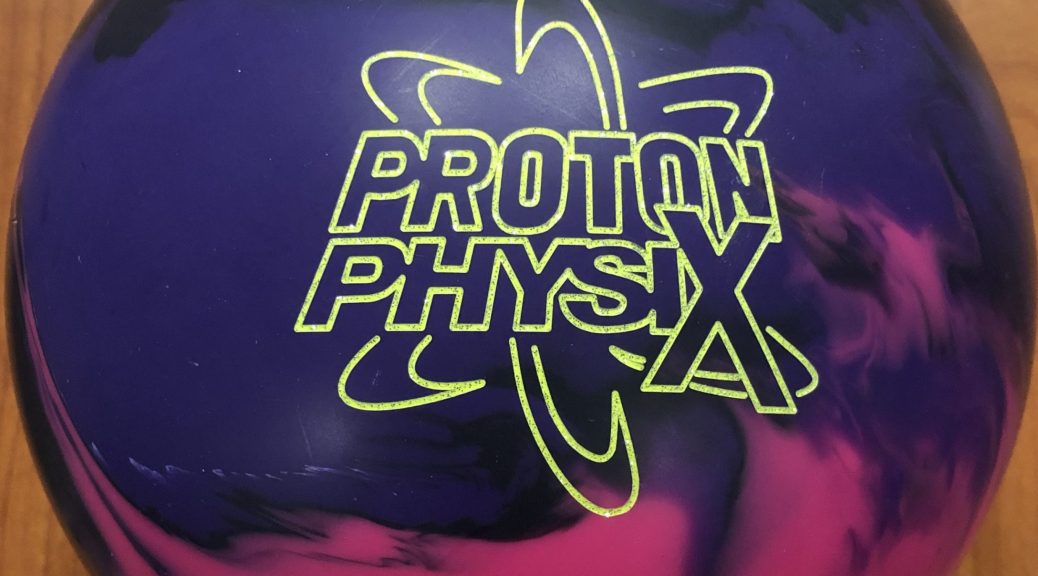 First Impressions
I never say just buy a ball and I won’t now but I think many will pick the Storm Proton Physix up for a few reasons we’ll get into.

Category
This ball is square in the strong defined category.

Overall
Firstly, the Storm Proton Physix fits squarely in the Strong Defined arsenal category, the big dog. Why do I think this is going to be popular? The shelf appeal…The Physix name… and finally the ball motion. The last one is the one I care about. This ball is plain and simple the quintessential huge top ball in the bag. Big strong hook set asymmetric ball. Plenty of traction out of box in 2000 grit abralon. And here, it truly makes the Proton Physix a beast. The OG Physix was more of the medium strong type ball. It actually got a little lost in my arsenal because of that. I like to simplify my bag except in known situations. So the OG was never strong enough to be the strong defined slot but also not clean enough to be the mid defined. So I brought it when I wanted something in between strength but didn’t have the control shape. The ball seems to be good at one thing, hook stop. So you can try various release manipulation but it seems to want to right itself the same way. So it’s not really release amenable which is not a bad thing. However, if you fluff it or push it, it’s going to look soft because it runs out of steam. Nothing new for these huge big traction pieces. If you are a slow roller, this thing is going to look absolutely huge.

I also toss a few shots 2-handed. Not evaluating form here but I try to roll it with much less axis rotation since it’s so big and I don’t have tons of speed. You can see how strong the ball is still. I really try to roll it forward and you can actually see how forward the ball is at the same time. Very prominent forward roll with the 2-hand release. This would definitely not be my go to as a medium speed 2-hander on a house shot. It’s a lot of ball but still fun to throw to give you an idea.

Sean was next and somewhat surprisingly the Proton Physix was quite easy to use and looked great. He essentially uses a lower axis rotation and speed. This allows the energy of the ball to be stored. With the amount of traction the ball creates, it’s definitely going to make the turn and it just drives. He can play this ball effectively anywhere from the 2nd to 4th arrow. Of course it helps the bowler has good command of axis rotation and speed. No ball is a magic bullet, you still have to throw it. But the Proton Physix was very comfortable for Sean and in the past, he typically isn’t jumping for joy to test the biggest piece. But the forward roll this time seems to work well.

Bryan is up next. It’s always a finicky proposition to find the big ball that retains enough energy for Bryan to be effective for his game. It’s always the trick of a ball that doesn’t force you in because it’s too strong but once in it doesn’t make it up hill. With the Proton Physix he was lined up straight away and the ball had the arc that we kind of expect to see from Bryan’s game and then takes advantage of the strong stand up nature. It was a good look…until it wasn’t. The incremental moves to find more oil yielded a less than desirable look. That’s the tricky part. This type of ball he had to look at a different adjustment. So he can move in but has to take a little bigger pull of the breakpoint to avoid opening the angles too much. It’s all incremental. So rather than 2 and 1, maybe 3 and 2 of 5 and 3. Some adjustment that creates shallow angle increases. Honestly, this is not surprising for the big asym balls. But what we can clearly say is this looked a lot better than any of the previous Physix balls for his game. He also compared to his Roto Grip Halo and as expected, it is pretty close. The Halo was a touch smoother due to some mileage on the cover. Hard to say if the Proton Physix is more stand up than the Halo as I remember my Halo was a very similar ball reaction.

Final Thoughts
At the end of the day, it’s not surprising to see Storm place a big strong asym at the top of the heap. The Proton Physix is a very straightforward fit there if you need that alpha ball. The closest in the lineup is the Omega Crux but it does shape a little differently. I’m not one to suggest you duplicate ball reactions so just choose what works for you. Storm certainly didn’t hurt the Proton Physix with the pretty shelf appeal and great smell.