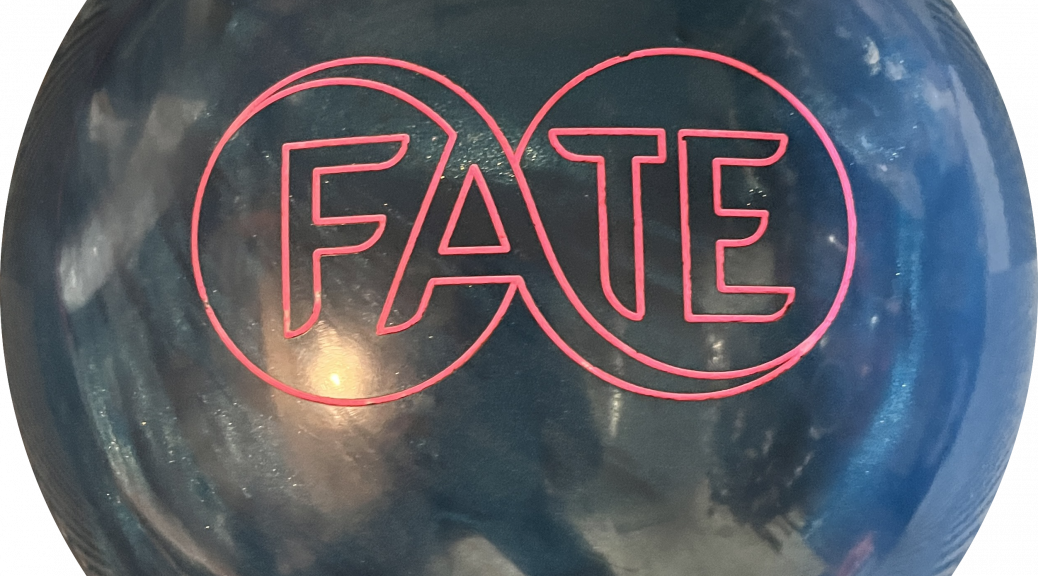 First Impressions
The Storm Fate puts itself squarely in the Mid Late category. It’s unclear how this will rate when thinking about similar balls from the Storm family.

Overall
Alright, here’s another installment in the Belmo Signature line. Clearly the collaboration is working so why not keep it going. Quickly, we have another ball with the ReX cover. This comes after the Infinite Physix, Night Road, and Dark Code. In this incarnation we get a strong symmetric core. We tested the ball out of box and I can say with confidence, I still dislike the shiny finish from the factory, no matter if it was the 1500 grit polish or the new Reacta Gloss.

Tyler was first and with polish, the Fate had a what I call a thin long and late reaction. It gets downlane quite long before making any real attempt to turnover. Then it was kind of a small flip. It was fairly over/under where it either over continued or just stopped. I could tell where the ball will be but this type of reaction just isn’t good. So we scuffed it up with a 2000 pad lightly by hand just until there was a slight dulling of the high sheen. This instantly turned the ball into something else in the sense that the over/under was completely gone. Now we can better demonstrate the ball reaction more true to the basic chemistry and makeup of the Fate. It is meant to have some more traction in the midlane while still going long while still hook strongly. It all sounds a bit convoluted mumbo jumbo. Basically, you still get good length while creating a bit of a rounder digging response to friction but not in the huge skid flip way. Whatever it is, ReX works nicely with light to medium surface on it. It looked great for Tyler and really easy to use on this pattern. Clearly a nice mid late reaction for a medium house shot.

Sean is back with us. As you can see, his rev rate isn’t very different from Tyler’s but they have slightly different styles. With the Reacta-Gloss finish, honestly he saw about the same type of reaction as Tyler. The ball had a similar shape. Just had the propensity to skid way too long at times and when he squared up which is what it looked like it wanted, it sometimes looked good and sometimes overhooked. Obviously in any case, throw the ball perfect and every ball looks great. But you shouldn’t have to make perfect releases every time. So anyway, we switch to the scuffed up finish. Sean had the same easy look as Tyler. The core feels kind of big, almost like a mild asym. It has a touch of hook set you can sometimes see with the deflection through the pins. So while the scuff shrunk the over/under substantially, you can still see variations in exit off the deck.

Next up is Bryan. It should be no surprise that although his reaction is rounder and less board coverage than the other 2, he still had the sort of similar over/under from the polish that was unnecessary. So quickly onto the scuffed finish which again is very mild. Barely equal to 4000. So the big call out is that it is a relatively weaker ball meaning clearly in the Mid Late category for Bryan as well which meant he was decently right and pretty direct with it. He gets a mild arc with the Fate. His best look was going through 7-9 at the arrows with a very small belly if any. Now my concern was that with the big core, this may wind up quitting if he moved in. However, he found a very good look going through 12 at the arrows with slightly slower speed. The ball seemed to like circling a bit with no issue.

Final Thoughts
Now I think it should be clear the Storm Fate is an obvious Mid Late ball. We recently tested the Phaze V and Night Road and we placed them in that category as well. So what do you do with these 3 balls?? Well we’ll come back with a comparison video. Perhaps it’s a matter of which ball you personally like best.