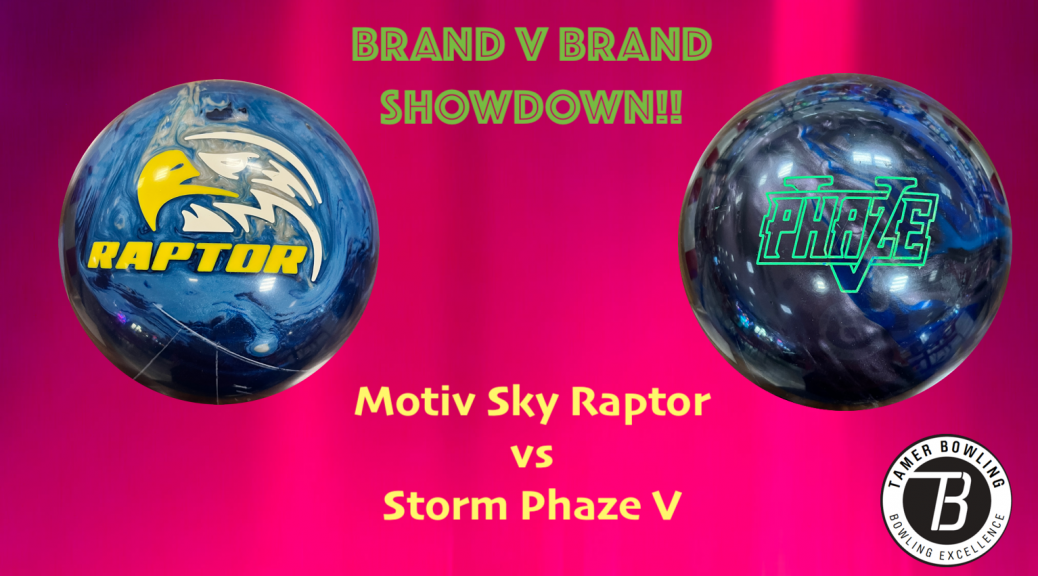 Welcome back and thanks for joining us. This cross-brand review is one of the things we get to do almost exclusively as we are independent reviewers. So why are we looking at these 2 balls? Well for one, they are released about the same time. Second and more importantly, they are both pearls with big symmetric cores. We have the Velocity vs the Affliction V2 core.

We have the R2S Pearl cover vs the Dynamic Infusion Pearl

On paper these are symmetric cores which typically means a boomy more rounded continuous motion. However, we know historically the Velocity core rolls like a big asym and we recently found that so does the Affliction V2 core.

Let’s get right to it. For me, the Sky Raptor is a Mid Defined ball while the Phaze V is a Mid Late. So they are really more compliments than competitors. The Sky Raptor has a defined skid/flip type shape. It’s hook phase is pretty quick and the ball rolls pretty forward like you would normally see with big asymmetric cores. Clearly it can handle and prefers a bit more volume. This way I can open the angles a bit but not massively. The Phaze V on the other hand is a boomier later reacting shape which looks more traditional symmetric in nature. That allows it to be thrown a bit deeper with more continuation. However, it handles less volume than the Sky Raptor. The responsiveness has a pretty different characteristic between these 2 balls. The Dynamic Infusion cover along with the Affliction core make for a kind of explosive quick reaction down lane. In fact I will venture to say it’s the sharpest ball from Motiv to date. With the Phaze V, it sort of gets there and feels like it hesitates as it’s transitioning but then turns over in a booming and climbing way. So one is hook set. The other is a bit slower transition, go go go then boom. The Sky Raptor was a bit more prone to over/under on this medium condition for me, despite the Phaze V having the Reacta Gloss finish.

For Tyler, it’s pretty much the same story. The Sky Raptor is clearly a big ball. It covers lots of boards and has that hook set motion. Kind of barrels forward through the pins. It’s the same story here in terms of preferring more volume although Tyler didn’t have much of an issue here. With the Phaze V, as you saw in the original video, he loved the motion but he saw more over/under with it vs the Sky Raptor mostly due to the Reacta Gloss finish. The Sky Raptor has less under and more over with his rev rate. The Phaze V just seemed to overrev and have mostly under vs over. Once we scuffed the cover a bit with 2000 abralon, it was smooth sailing literally. It doesn’t feel huge and feels like a proper mid late ball for him. But it does enough reliably. The Sky Raptor is also clearly a mid defined for Tyler and a shape he doesn’t use often. However, it looked quite good and maybe a different kind of option for him when it’s higher volume with some breakdown.

Last but not least here is Bryan. The good thing is that both the Motiv Sky Raptor and Storm Phaze V were the same kind of ball for each bowler. No one was surprised after having seen the other test it. The Sky Raptor had that same heavy hook set shape. When Bryan found a slot, he slayed with it. Just crushed the pocket. Once he had to open up a little, he immediately saw what he’s seen with other mid defined shapes, a ball that quits. It doesn’t generate store enough energy to provide enough angle to carry. Now with the Phaze V, while it was clearly less ball, it was also way more versatile. He could strike from the same area as the Sky Raptor but with that rounder shape off the friction. The big thing now was that he could get in with the Phaze V and he had way more room to move and still get good motion through the pins.

Both companies have something special here. Motiv has found what I feel is a highly responsive cover more than anything else to date. Storm continues to use R2S as it is probably the most reliable coverstock in history frankly. Clean enough but creates a boomy continuous characteristic. We also know it takes very well to surface adjustments. There you have it. A little bit of a surprise with both brands. Motiv lighting up the skid/flip buzzer while Storm makes the Phaze V a bit rounder than its predecessor.